This was my second attempt at making simple video games within a 64 pixel display. This time however, I used an RGB LED display rather than just an RG display. The circuit design is quite similar to the old 8×8 Game System, just a little more expanded.

I quite enjoy the old retro video games from the 80’s era. So I have put together this hobby with my interest in electronics and have come up with a handheld video game system that allows you to play pixel based games in 3-bit colour!

Please note, This game system has been superseded by the new Super Pixel Bros handheld game system. You can find details of this game HERE.

I have come up with two games so far. The first game is Super Pixel Bros.

As you may have guessed it is based on the ever classic game Super Mario Bros by Nintendo. This is one of my favourite games so I thought i’d see how I go making it within 64 pixels.

In this action packed adventure you play Pixel, a one pixel little guy who you have to guide through 32 levels of action packed fun. If you have played the classic platform game you will soon recognise what this game sets out to achieve.

Note, this game has been updated and revamped from the ground up using Swordfish Basic rather than assembly language. See the link above for further details.

The second game that I made for the LEDBOY I have named The Great Race II.

This is the sequel to the original game made for the 8×8 game system. This time the little one pixel car is back armed with all sorts of power-ups including a missile launcher, nitro-boost, invincibility and more.

The LEDBOY is based around the microchip PIC18f4550 microcontroller which has: 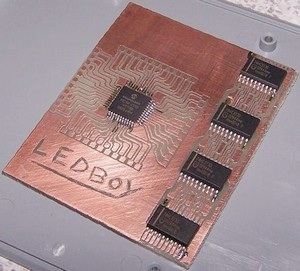 The RGB Matrix I have used is quite big compared to the previous RG Matrix. it measures 6x6cm (four times the size of the old matrix!) But still only has 8×8 pixels. Unfortunately the display is not ‘diffused’ so I have had to add some masking tape to diffuse the LED’s and make the colours mix properly.

I have used an original Nintendo Gameboy as the controls for the LEDBOY. A nice way to mix 1989 with 2009 I think!

I have also added a super simple 1-bit audio circuit which uses a speaker from an old motorola phone. Hopefully I will end up making games with sound, but at the moment I have not implemented it yet.

I also had plans to use two seven segment displays and two columns of 8 LED’s to keep track of lives, score, levels etc… but I am not using them at the moment

And finally, I have added a db-9 connector to facilitate in circuit programming and also for further development (like adding analogue controllers). 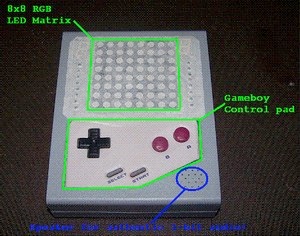 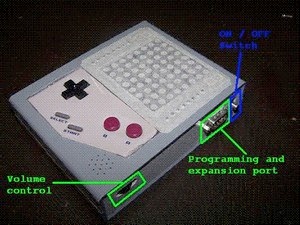 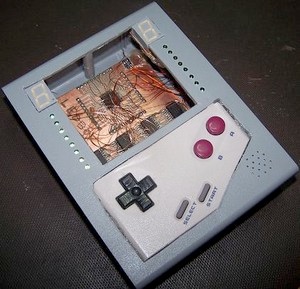 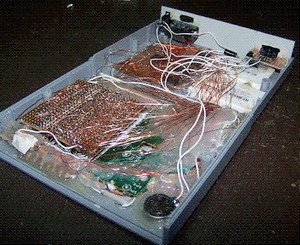 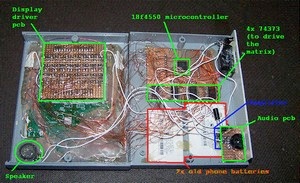 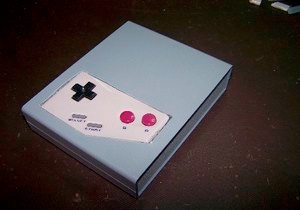 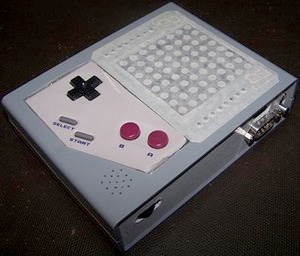