This game is based on the 1985 Nintendo classic – Super Mario Bros. 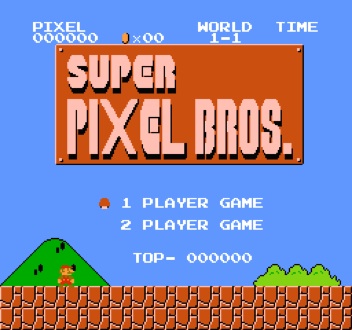 Super Mario Bros is one of my all time favourite games. I liked it so much in fact that I decided to make my own version, but restricting the graphics to just 64 pixels! I have given it the name ”Super Pixel Bros”

The game shares some similarities with the original, you just need to use your imagination since all the characters are represented by a single pixel. The aim of the game is to make your way through each of the twenty levels, jumping over obstacles, shooting and jumping on bad guys and avoiding pitfalls like lava, water and holes. It is an action packed game full of mayhem that is actually fun to play and even presents a bit of a challenge. A 16×2 LCD Screen is included for you to keep track of level, score and lives.

While my original version was made using an electronics breadboard and through-hole components, I thought it would be much better to design a dedicated circuit board and keep it all as compact and cost effective as possible. As such i came up with a design similar to a handheld game system from the 1990’s. It consists of the 8×8 LED Matrix, eight game buttons, a speaker for sound, an LCD display and a handful of components to make the thing work.

You can purchase the PCB direct from iteadstudio by clicking here. 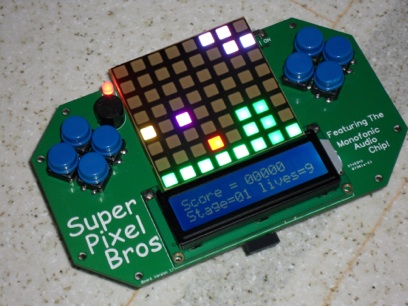 Of course the best way that I can show you the game in action is by way of a video clip. Just press play on the youtube video below.

With the first release of the source code – there are 20 levels programmed in. I have tried to replicate the levels from the original Super Mario Bros as close as possible by using the level maps from here:

(Thanks to Ian Albert for those)

Each level is 120 pixels wide and can be quickly drawn up in paint and then converted to binary data using the level converter software that I made using Visual Basic.

(Download link provided at the bottom of the page).

Please note that in order to program your newly created levels into the microcontroller to play them, you will require the full version of Swordfish Basic. (the free version does not allow you to use as much RAM required by the game unfortunately.)

However, if anyone would like to send me their levels (A complete set of 20 levels) I will be happy to compile it and put it on this web page for download. 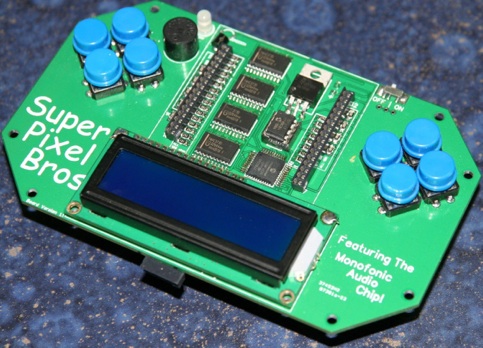 Construction of the project is more or less, quite straight forward. I have designed the board such that all components are labeled directly on the board which makes it very easy to determine what goes where. 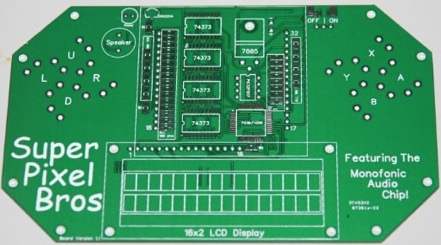 Having said that, most of the components are surface mount which can be a bit tricky to solder in if you have not had experience with them before. If you have not, I would highly recommend getting yourself a soldering iron with a fine tip, some flux, some fine solder. On top of that – there are plenty of how to video’s and web pages that detail how to actually solder surface mount devices.

Some things to note.

Unfortunately I have not actually drawn up a schematic for this project. I am quite busy these days and do not have any plans for drawing a schematic. I basically designed the circuit straight onto breadboard and once it was working, I then drew up the PCB design.

Please note that the PCB Design is in gerber format and you will need a gerber viewer to view them. 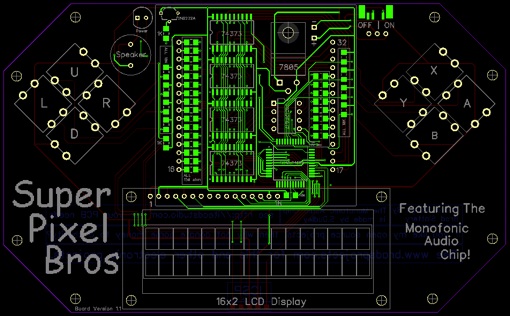 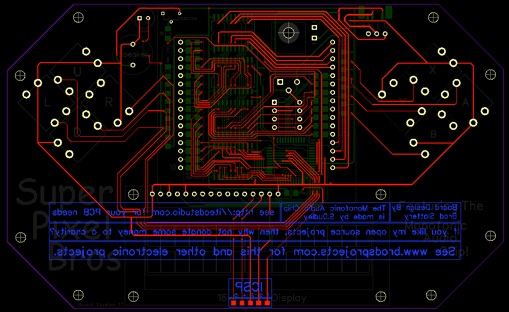 How the Circuit Works.

Power is supplied via the 9Volt battery and dropped down and regulated at 5Volts (required by the digital circuits) by the 7805 regulator.

The circuit is all based around the PIC 18f4550 microcontroller which has been my microcontroller of choice for over a year now. They are inexpensive, have plenty of input / output ports, RAM, program memory and even some ROM which comes in handy when saving high scores.

Once all four chips have their memory stored within them, the microcontroller will enable the tri-state buffers within the 74373’s which will send the data to the LED matrix and will light up certain Red Green and Blue segments in one particular column. the microcontroller repeats this process seven more times to complete one full picture. This happens many times a second so to the human eye, it looks like a steady picture.

Throughout this process, the microcontroller is constantly checking the game buttons to determine if one or more has been pressed. If it has, it will call a specific sub routine within the program memory to update the display in the required fashion (I.E. move the graphics left or right, or make the player jump or shoot etc…) The microcontroller will also send certain data to the Monofonic Audio Chip to tell it to play the required sound.

The Microcontroller also sends out specific data to the LCD screen to update it with specific information such as the players score, lives remaining and current level.

The sourcecode has been written in Swordfish Basic. There is a free version available although the free version limits you to using only 256 Bytes of RAM (which is quite a lot) although it unfortunately is not enough for the Super Pixel Bros game (which requires 632 bytes). This means that you should be able to open and view the sourcecode with the free version, but not compile it. This is only really a problem for you if you for some reason want to modify the code.

Please note that the source code is messy and for the most part, it is not commented. I am providing it as is without warranty etc… 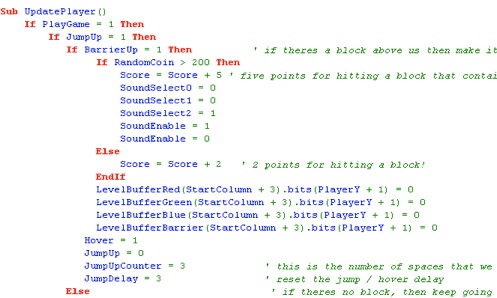 If all you want is to play the game as I have made it, then all you need is the HEX file (see below for download), which you will program straight to your microcontroller, no compiler is necessary.

For those interested, the sourcecode takes up 1,173 lines of code, 21,236 bytes of program memory and requires 632 bytes of SRAM.

You can download the Super Pixel Bros Archive Here:

[…] So a few years ago I decided to make my own version of this Nintendo classic but restrict it to just 64 pixels on an 8pixel X 8pixel RGB LED matrix. I gave it the name Super Pixel Bros. (Full details of this project can be found HERE) […]

Sorry Jake, I meant to reply to you over a month ago but have just remembered now! You’re right I could have made a more detailed bill of materials, apologies for that. However itead studio was selling them as a kit with all required parts although I am unsure if they are still doing this. Kieran, I am unsure if itead is selling the kits still (I was not making any money from the kits, they just asked if they could do it) you may be interested though in my latest kickstarter campaign which you could make Super Pixel Bros… Read more »

On The Itead Studio page it says: Brad Slattery has build these interesting gadgets, and now we are working with him to have these made available as a kit (with all components included) so that you don’t have to shop around yourself.

I was just wandering if you are still doing this.

wish you more specific on the parts needed i cant find them all at the iteadstore, why cant you just make a kit!!!!!!

you like making things difficult for consumers dont you…

[…] Please note, This game system has been superseded by the new Super Pixel Bros handheld game system. You can find details of this game HERE. […]