I have been programming microcontrollers for about 6 years now and have mainly been using Microchip’s PIC range of microcontrollers. My favourite programming environment is Swordfish Basic. It is a pleasure to use however despite being around since (I think) 2007, it doesn’t have a very large user base.

Arduino is a fantastic way to get into microcontroller programming, with a huge user base, loads of great shields and add-ons and a very active community. However I have found the programming environment to be quite annoying – it’s just not fun (for me) to program in the Arduino IDE.

I am now sold on the arduino environment all thanks to a wonderful plugin called VISUAL MICRO. This plugin gives you everything that the Arduino IDE gives you – but it adds my favourite thing – Intellisense!

Intellisense gives you text prediction as you type. It will give you a dropdown box with all the things that could fit what you are trying to type, you just press TAB to accept the highlighted one and you can then keep typing your code. It makes coding so much faster, and loads more fun.

Using the stock standard Arduino IDE, If I wanted to set digital pin 13 to a logic 1 (high) I MUST write it like this:

So now that we have intellisense, I will start to write digitalWrite, and as soon as I type the first letter ‘d’, it will come up with a dropdown list of possible words I can put in: 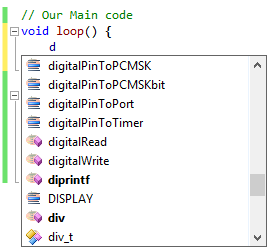 Then as I keep typing in more, the list will narrow down to what I am looking for:

Now that the one that I want is highlighted (infact, it’s now the only one in the list) I just press TAB and it will fill out the rest for me and even include brackets and it tells me what it is expecting in the brackets:

The BOLD uint8_t tells me that this is what I am currently typing in, This is my port pin number. So I type in 13 then comma to get this:

Notice how the bold text has moved onto the second half of the bracketed section I.E. the other uint8_t, this is where I set it to be high or low. So I start typing in ‘high’ and as soon as I type the first letter ‘h’ it pops up with this:

So now I can just press TAB to accept this, and then we’re done!

I will be adding to this post with details of how to install this plugin soon – by the way, it’s free!